Column - On the Subject

For regular flyers, air travel is a significant contributor to their personal greenhouse gas footprints. A dilemma – especially for climate scientists. Economist Gianluca Grimalda, Ph.D., slow travelled to Tokyo and Papua New Guinea and shows how business trips can be done differently. A travel report.

An editorial view from Gianluca Grimalda, Ph.D., Kiel Institute for the World Economy

Travelling is almost a necessity for a scientist. Researchers need to attend conferences to hear the most recent developments in their field. They also need to receive preliminary comments on their work. These feedbacks can be vital to shape up a paper. For those researchers, like myself, who are interested in comparing different cultures and different institutions around the world, travelling is even more necessary. But travelling, if carried out by airplane, bears a big environmental cost. The aviation sector is responsible for approximately 4.8 percent of total greenhouse gas emissions, once the so-called multiplying effects associated with producing these emissions at high altitudes are factored in. Therefore the “slow travel” movement is in existence for several years. This is not an organised association, but more and more people have noticed that they want to travel "slowly" and prefer to travel by train, bus or ship instead of by plane in order to protect the environment. The best known slow traveller at the moment is probably environmental activist Greta Thunberg. This percentage is certainly much higher for academics, because they fly much more frequently than the general public. That is why many researchers are making public commitment to reduce or eliminate flying, such as the No Fly Scientists group. Slow travelling to even far away destinations to attend research-related events, using trains, coaches and ferries rather than catching planes, though still rare, is becoming more common.

This year two major events stood in my agenda: Attending the ThinkTank20 conference in Tokyo, where researchers from around the world would discuss policies relevant for the G20 meeting of head of states. And carrying out fieldwork in Bougainville, an island in the middle of the Pacific Ocean part of Papua New Guinea. This 27.900 kilometre journey would have produced 2.76 tonnes of carbon dioxide had I travelled by plane. To have a term of comparison, a person travelling by car 30 kilometres each day would emit 2 tonnes of CO2. I thought that I could slow travel instead. 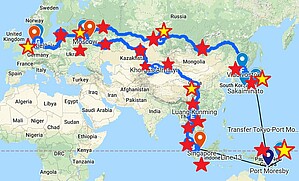 A few insights: It was relatively easy to organise my journey overland. The start was in Kiel, where the Institute for the World Economy is located, where I work. I travelled to Moscow by long-distance bus, through Russia by the Trans-Siberian Railway, to Japan by ferry and finally arrived there by train to Tokyo. My way back was via Southeast Asia, China and Kazakhstan back to Moscow, I could also use long-distance buses here and the train in China. But there was virtually no way to travel to and from Papua by ship. A cruise would leave Japan and reach Papua, but this trip would have happened way too late for my planned fieldwork, and the environmental impact of cruise ships is comparable to that of planes. Flying to and from Papua was then the only option on the table. Radical activists would have given up on the whole trip to Papua. But weighing up all the pros and cons I decided that it made sense to go. Part of my research in Papua is connected with climate change. At the end of my fieldwork I would have given more than ten talks on climate change, explaining its scientific bases and trying to encourage people to take action against it. In Bougainville this mainly entails avoiding tree logging. I thought that my journey could bring about a net benefit for the climate, considering all costs and benefits involved. 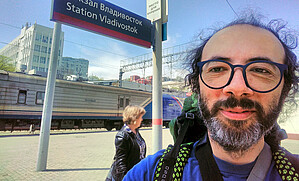 I made the commitment to fly over the shortest routes possible to achieve and leave Bougainville. According to the estimates of Carbon Footprint, travelling by train, coach and ferry from Germany to Japan, and then from Singapore back to Germany, produced 0.36 tonnes of carbon dioxide. That is about 7.5 times less than flying. To be sure, these are only estimates based on the average impact of means of transport, rather than the actual estimation for travelling, say, in Russia on the Transiberian. But one cannot be wrong when saying that the environmental impact of slow travel is positive. Overall, the journeys took 40 days, of which 20 were actually spent on means of transport. When I was travelling by train, I used the time to work and am grateful to my Institute that considered the time as working time. The other 20 days were spent in cities, partly for sightseeing and partly to work with colleagues.

Reducing greenhouse gas emissions is not the only benefit of slow travel. Travelling by train gives the opportunity to actually get in touch with people. One can also admire natural landscapes passing by from the window. Finally, slow travel goes through rural villages. One image that impressed me the most was the border crossing between Laos and China. In rural villages in Laos most houses are made with freely available natural materials: sago leaves for roofs, inter-woven bamboo leaves for walls, and soil or wood for floors. Houses are no more than one storey high. Roads are curvy, bumpy and slow, and many stretches are not asphalted. The border is preceded by a no-man's-land where red clay dominates the scenery and no building can be seen around. And then suddenly in they come many huge cement buildings, maybe 10-storey high, with lots of pinnacles, pointed roofs and multi-coloured walls. That was China. I thought that I was entering into the 21st century capitalist world. This image brought home to me the importance of institutions and economic growth more than hundreds of pages of an economics textbook.

Slow travelling is only one action that environmentally-concerned academics can take. As argued in a recent Nature article, reducing the conferences one attends is another one – and obviously an even more impactful one than slow travelling. This might be a difficult step to take and video conferences are no perfect alternatives. The climate is changing dramatically, and so our ways of life must adapt to achieve zero emissions in 2050. Also and especially as a scientist, I would like to set a good example here.

About the author
Gianluca Grimalda, Ph.D., is an experimental economist at the Kiel Institute for the World Economy (IfW Kiel). You can get more insights about his trip on twitter.

This website uses cookies. Those have two functions: On the one hand they are providing basic functionality for this website. On the other hand they allow us to improve our content for you by saving and analyzing anonymized user data. You can redraw your consent to using these cookies at any time. Find more information regarding cookies on our Privacy Policy and regarding us on the Imprint.