The warming and acidification of the oceans are direct consequences of climate change. They damage coral reefs and thus also their important function as breakwaters disappears. Dr. Alessio Rovere has investigated this on site and reports on his findings.

Surfers call "Liquid perfection" the luck to stand in a perfect wave. In there, you can forget everything around you for a few moments. Surfing has been my passion for over 15 years, and paddling out on a surfboard at any location around the world, either in crystalline tropical waters or in a cold winter day in Northern Germany, always gave me a feeling of freedom and happiness.

Surfing has also somehow shaped my interests as a scientist. In the course of the years, I learned that what is pure pleasure for me, sometimes means an existential threat for people in tropical coastal regions and is feared as a force of nature. An example of this is a place called Teahupo'o, a wave in Tahiti that was put on the international stage when a very famous surfer, in 2000, surfed what was then defined ‘the millennium wave’.

The waves at Teahupo'o can reach a height of more than nine meters: a real threat for inhabitants of coastal regions. Luckily, in Tahiti and other tropical regions, coral reefs work as natural breakwaters. The wave breaks on the reefs and loses its power before it rolls towards the coast, where people live. However, coral reefs are particularly sensitive ecosystems that react to changing climatic conditions. Climate change threatens reefs, for example by acidification of the seas, or rising water temperatures. Will reefs keep protecting tropical coasts by breaking waves under future climate change scenarios?

For our research, colleagues and I have studied the interplay of tropical reefs and the fluctuating sea level. We asked questions such as: How does climate change affect the function of reefs as wave breakers? And what role does sea-level rise play in this? To find out, we first went to French Polynesia and measured a large number of waves over more than one month at different places, from flat as well as from high waves. 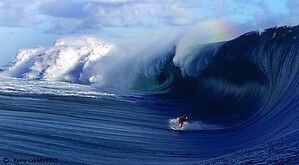 We used these data to calibrate wave models, to be able to simulate mathematically how a reef breaks a wave today. Then, we simulate the same waves, but with different conditions, such as higher sea level, or reduced reef three-dimensional structure. Our models show that, in a future world where sea level is higher and the reef degraded, the average wave height reaching the tropical islands could be up to six times higher than today.

We also find that a key role is played not by sea level rise, but by the three-dimensional strcture of the reef, that we call complexity. The reef complexity is created by the corals that make that of the reef a rough surface. If we keep reef complexity unchanged in our models, the reef will keep breaking waves even in moderately higher sea levels. But if we make the reef smoother, then waves will be bigger on the coast also at present sea levels.

As a general rule, a healthy reef has a high complexity, so keeping the reef healthy is essential to keep its breakwater function. For this reason, it is important to limit CO2 emissions and halting global warming. Local actions aiming at reducing the human-induced stresses on reefs, such as overfishing and coastal pollution, can help as well.

Dr. Alessio Rovere is head of the young scientist research group „Sea Level and Coastal Changes“ at the MARUM – Cen­ter for Mar­ine En­vir­on­mental Sci­ences and the Leibniz Centre for Tropical Marine Research (ZMT).